The Wild Inside: Grizzly Bears, Yellowstone, and the Craighead Brothers 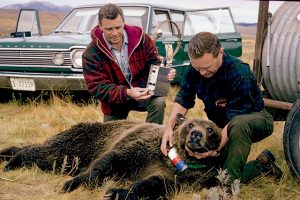 John and Frank Craighead / Photo by the Craighead Institute*

A high school biology teacher impressed upon me some of the adventures to be found in the wilderness in and surrounding Yellowstone Park. He talked of Grizzly bears and the wildlife biologists and brothers, John and Frank Craighead, and my impressionable mind was hooked. In class, this teacher showed a video of the brothers involved in their bear research, and I thought then that this was to be my destiny—a wildlife biologist.

At age 16, when I was legally able to drive without an adult, along with a few of my closest friends, we headed West and took our first adventure into the wilderness of Yellowstone National Park, where Grizzly bears still roamed free.

In our minds, Yellowstone was a place of grand adventures.  We spent many hours preparing for those first trips.  Topographic maps were combed over while we debated which trails and route would be best.  Food and supplies were carefully prepared and rationed.  We all agreed that it was important to get away from the best known trails, and seek as much wilderness experience as we could.  Like the line from Robert Frost’s poem The Road Not Taken, we also sought the less traveled path:

Two roads diverged in a wood, and I-
I took the one less traveled by,
And that has made all the difference.

Over the next decade, most of us from those first trips had developed even closer ties to Yellowstone.  Some of us had moved to the Park itself to work and continue the adventure.  Others, including myself, picked a university in part based on its proximity to the wilderness of Yellowstone.  I ended up in Bozeman, MT, home to Montana State University, and a short one to two hour drive from the Northern border of the park.

Yellowstone is an extremely diverse ecosystem.  Its flora and fauna has been studied extensively.  Perhaps some of the best known wildlife biologists associated with Yellowstone were the twin brothers, John and Frank Craighead.

The Craigheads were the first biologists to use radio telemetry or radio collars on animals to learn more about the animals’ behavior. They spent the 1960s studying Grizzly bears in Yellowstone Park, and this Grizzly bear research is still considered groundbreaking. In addition to the study of the Grizzly bear, the Craighead brothers were involved in many other areas of biology and conservation. Some of their writing was included in the Wild and Scenic Rivers Act of 1968 which helped to protect some natural flowing rivers.

Like the Craigheads, my first area of study while in college was also in biology. I was fascinated with natural history and all of the abundance that that entailed. While immersed in biology graduate studies, I became more and more drawn to the wild inside. My reading of psychology (on the side) and particularly Carl Jung, showed me that the inner world of human beings was just as abundant, fascinating, and wild as that of the wilderness outside, like that of the Greater Yellowstone ecosystem.

I wasn’t satisfied to call a land wilderness, unless bears or wolves still roamed the land free. Similar to a wilderness like Yellowstone, we all have an inner wilderness that is just as wild as Yellowstone Park, and inhabited by inner dream animals, including both bears and wolves, similar symbolically to those animals that we find in the outer wild lands.

Our night-time dreams are like a wilderness. In our dreams, we find mammals, birds, fishes, insects, reptiles and plant life. Some of the emotion connected to these dream animals is like those we may encounter if we see the animal in the outer wilderness.

Animals can symbolize many things for the dreamer, and it is generally not a good idea to generalize one thing that a certain animal might mean to dreamers. Having said that, however, a broad rule of dream interpretation is that animals depicted in dreams oftentimes symbolize the deeper instincts.

Similar to dream animals often symbolizing instinct, it is also not uncommon for dreams to use the symbol of a real wilderness area (I have dreamed of Yellowstone many times) as a symbol for the unconscious and the world of dreams. I have seen the dreams of many different people use the image of wilderness as a gateway to a deeper connection to the inner wilderness of the unconscious.

A 57 year old male dreamed of a Grizzly bear.  In his dream, the bear was banging his paws on the cabin door in an effort to break it down. This urgent dream suggested that this man needed to let his “symbolic bear” inside so that he could utilize this instinctual energy in his current life phase.  He had been caught up in and felt defeated while attempting to navigate his way through powerful workplace politics and dynamics that demanded a certain kind of masculine energy. By working with this Grizzly bear image in his therapy, he was learning to incorporate his inner bear into his complex work life, and felt less defeated by doing so.

Embracing the world of instinct is necessary for following a path of heart that your dreams have in mind for you. Equally as important, however, is having the awareness of knowing when you may need to assist with some “corrections” to this wild, instinctual side.

An excellent metaphor for what I am trying to say here was used by the Jungian analyst, Barbara Hannah, in a lecture of hers printed in an edited book titled: The Cat, Dog, and Horse Lectures and “The Beyond.” She discussed the metaphor of taking a boat down river rapids. Hannah was speaking of the relationship of instinct to consciousness and discussed a simile used by Dr. Baynes, one of her own early analysts. Hannah said:

We see here the importance of keeping consciousness intact. Dr. Baynes once more or less expressed the same thing in the simile of a boat. At first, in natural consciousness you went blindly with the current till you hit a snag or came to grief in the rapids. Then, warned by the catastrophe, you learned to row against the stream and you usually went on doing that till you collapsed with exhaustion. And then only were you ready to learn both ways: i.e., to let your boat go with the stream [instincts] and use you consciousness to steer. (p. 59)

Anyone who has ever taken a canoe, kayak or other boat down a river with rapids, knows that you can’t simply point downstream and go.  There are adjustments necessary on the way.  Sometimes you must paddle aggressively into the rapids (or away) and at other times, you must mostly steer using the paddle (consciousness) as a rudder,  and letting the water’s current and energy (instincts) do the rest.

It is similar with learning about the instincts through dreams and then actualizing these behaviors. You sometimes need to go with the instinctual energy and associated behaviors full ahead, as if running a river rapids.  And at other times, you may need to pull back a little and make a bit of an adjustment.

Croke (2007) said that Frank Craighead wrote about releasing a Grizzly bear after being tranquilized, “When releasing grizzlies, point them away from you.” This humorous take on working with the great bears illustrates the need for precaution (at times) when dealing with unharnessed instinctual energy.

Jungian psychology and psychotherapy can be a safe, effective container for exploring the instincts, and the wilderness of your dreams. Hannah (1992, p. 58) quotes Jung who said, “For instinct is merely the unconscious mental functioning of man, in which there are the possibilities of extracting the gold of consciousness.” Learning from and about your instincts, dreams and the inner wilderness can have the added benefit of increasing awareness and consciousness, as well.

The dream world is truly wild inside. If approached with the proper attitude, openness, and courage, this world of the image and symbol can lead you to adventure and discovery. Similar to exploring a wilderness like Yellowstone, which is inhabited by the great Grizzly bear and wolf, delving into the dream world is not for the faint of heart. But it is for those who want to live a life closer to their own deeper Self, and the wild inside.