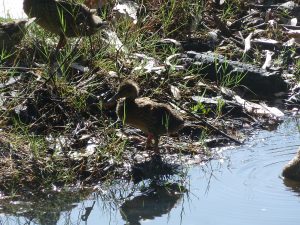 The underdog, the oppressed, the scapegoated, the last-picked for the game, the runt—these characters and the means by which they scrap themselves onward in life, weave themselves into some of our favorite stories and myths.

The Biblical story of David and Goliath is one such story. It is the tale of a young man going to battle with a simple sling against a much larger enemy, and defeating him against all odds. Charlotte’s Web, by E. B. White,  is the story of the runt of the litter, a pig named Wilbur, who is saved from the butcher’s block by the help of his good friend, a spider named Charlotte.  And in horse racing lore, a small horse named Seabiscuit goes on to defeat champions that were much larger during the time of the Great Depression when people needed a good story about hope.

These are just a few examples of the many stories about the underdog, the runt, that have captured our collective imaginations. Recently, as I’ve walked on my favorite neighborhood trail along a coastal lagoon, I’ve been noticing the same family of mallard ducks.  The hen and her six ducklings have been swimming up and down the creek and lagoon, usually with one or two drake mallards close by.

Like so many other seemingly every day occurrences in nature, this duck family brings to awareness the story of the runt and survival against the odds.  Swimming amongst the family of ducks, often on the outside of the rest of the bunch, is the one very noticeable and much smaller duckling—the runt of the litter.

Lately, each day when I walk by the lagoon, I am happy when I see the runt again having made it one more night escaping the resident skunks, raccoons and cats that are always a threat to birds that may roost and spend the night on the ground close by the water’s edge.

When the runt survives and perhaps one day even thrives, it brings yet another lesson from nature about the everyday miracles that blast through the statistical norms of the bell curve.

Let’s look at the chances of survival for the runt by comparing two outlooks. On the one hand, we have Darwin’s theory of “survival of the fittest” and natural selection.  Looking at the odds this way, we may think that the runt has little chance of making it to adulthood since the runt is the smallest of the litter and will likely be out-competed for food and more susceptible as prey.

On the other hand, we see the examples in nature and story of the runt who defies the odds and accomplishes one developmental step after another. These examples capture our hearts and imagination and weave themselves again and again since the beginning of time into some of our favorite stories and myths.

Although our intellect may see the logic in Darwin’s natural selection, it is only a partial truth.  Our intuition and non-rational side of the psyche holds another kind of intelligence perhaps even more precise than that of logic.

For it is in the realm of the heart and soul, that the stories and truths learned and passed down by our ancestors remain embedded over time. These stories, the best stories, help to define what it means to be alive—the runt, the mallard duckling in my story here, defies the odds, escapes the raccoons and skunks and makes it through yet another night into the dawn of a new day.