The River, the Story, and the Rescue: A Waking Dream

The river. The river was our life-line. The Missouri river, the longest river in North America, begins in Montana, flowing east into North Dakota and then south into South Dakota, where this story takes place.  The Missouri runs straight through the center of South Dakota, splitting the state into two sides. The land around the Missouri river here consists of wide-open rolling prairie, with periodic wooded draws draining into the river. It is not uncommon to have miles of open prairie devoid of trees, roads, homes, or people. It is a beautiful land with a big sky. Hot and humid summers are common along with snowy, bitter-cold, and desolate winters. This story is centered in this land along the river. A land that in some ways hasn’t changed much in hundreds of years.

“Waking dreams” are an important concept related to this story. An external story can be like a dream story because it’s a story that gives meaning. Both Carl Jung and Arnold Mindell, a Jungian analyst and founder of “process-oriented psychology,” discussed the notion that we are dreaming all of the time. Jung wrote about continuing to dream while awake and explained that it is something that occurs beneath our waking consciousness. Similarly, Mindell also discussed the idea that we are getting signals from the unconscious throughout the day, and that these signals can be worked with in a manner similar to how one would work with a dream. The concept of “waking dreams” is one that helps to contain this story.

The story. It was deep into summer on the wide open prairies of South Dakota. I was on my way to go fishing with a childhood friend on the Missouri river, and more specifically, Lake Oahe, one of four large reservoirs created by dams on the Missouri river. It was a hot and humid day when we launched the boat and headed up river. Our plan was to drive the boat for an hour or so to get to a spot that was rumored to be good fishing. I had a long history of adventures with my friend Steve, who by now was married with one child. Contrary to this, I was single, in my mid-twenties, and at a phase of my life when I look back now I would describe as my “lost” years.

I drove for several hours to meet Steve at his home in a small town situated on the Missouri river. We got the boat and gear ready for what was to be only a few hours of fishing. We arrived at our fishing spot and had just started to fish when our boat engine died. Steve was the kind of person that attracted adventure. It was not at all uncommon to have unexpected things happen when out with Steve. So when our engine broke down, it initially seemed like just another regular outing.  However, after more than a couple of hours of trying to get the engine running again, we realized that we might be “up the creek without a paddle” as the saying goes.

At this point we decided our best plan would indeed be to take out our paddle and slowly make our way to shore with the big boat. We beached the boat on a small stretch of isolated beach, and once again got busy with trying to get the boat engine running again. At this point, I was caught up in the adventure of the moment, and didn’t feel much pressure to quickly resolve this dilemma. Steve’s situation, however, was very different. He had a new wife and child, and it was now close to the time of the day that he had told his wife we would be coming home. The pressure to resolve the situation was building. When it was clear once again that the boat engine was in fact “dead,” we talked about our options. 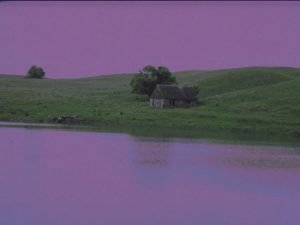 We agreed to start hiking away from the river with the hope of finding a home or road and people to help, or at the very least a telephone. We walked for several miles on the wide open prairie with not a road or building in site until we came across an old abandoned homestead. We went inside and stumbled upon a nest of rattlesnakes, almost stepping on one before we realized what had happened. This encounter, coupled with now being hungry, tired, and sunburnt, enticed us to head back to the boat and prepare for the night.

Since we had originally planned on our fishing trip to last only for several hours, we had not come prepared. We were dressed in shorts and t-shirts, and had only a bag of Doritos and a couple of sodas to drink between the two of us. It was our good fortune to have a pack of matches with us, and there was an abundance of old, dried cow pies scattered about which we could use as fuel to build a fire. The prairie close to where we landed was devoid of trees or wood to use as firewood, and we absolutely needed a fire to keep warm when the temperature started to drop and more importantly, to fend off the clouds of mosquitoes that would soon descend upon us as night approached.

The rescue. We collected cow pies and started a fire. Hungry and weary, we gathered around the fire and talked about life, our dilemma, and our strategies for getting us out of this mishap. I wanted to paddle out into the middle of the river (it was very wide here with more of the feel of a large lake with a current) and drift in the hope that eventually we would be spotted. We discussed other plans, such as once more trekking out over the prairie in the morning. We decided to “sleep on it.” We awoke the next morning and debated again our options. While Steve was out gathering more dried cow pies, since our fire had died overnight, a small plane flew closely overhead and off to our side. I told Steve about this when he returned and told him that I had a feeling the plane was searching for us.

After a night of little sleep, sunburnt, and covered in mosquito bites, we settled on trying my plan and paddled out into the middle of the great river in hopes of being spotted. Several hours after arriving near the middle of the river and beginning our drift, a boat approached. We recognized the boat as an official State boat that game warden’s drove, and to our delight the boat pulled up beside us and we informed them that “yes” we were the stranded and “lost” fishermen that they had been searching for over the last twenty-four hours. After a long tow down river and to the boat launch, we finally arrived. Waiting to greet us were several news crews, search and rescue men and women, and Steve’s wife and family.

The waking dream. We can look at vivid, meaningful life experiences in a way similar to how we would analyze and work with a dream. For the psychotherapist who works with dreams, this can open a whole new opportunity to do work similar to dreamwork and with clients that may not typically recall their dreams. In my experience described above, there is rich imagery to analyze as if it were a dream.

First, there is the river as metaphor for life. Dreams often use rivers to symbolize the journey through life. I entered a river at a point in time that I was “lost,” in relation to career and direction. My old way of going down the river was not working any longer as symbolized by the boat engine breaking down.

Second, the protagonists are faced with decisions about how to proceed and resolve their “crisis.” They initially decide to go over land. This choice does not provide a solution, but it does hint at clues. In our story, we are surprised by snakes, which in dreams are often symbolized as the unconscious and represent the world of instinct. We learn that a relationship with the unconscious is vital to future success on one’s life path. Out of necessity we must utilize animal waste, the cow pies, as fuel for fire and to help us stay warm and protected. In other words, we must deal with our “shit,” and may even find something of value here (warmth and protection.) Alchemists utilized fire to help with the transformation from one state to another, both figuratively and literally. In my case, the ego needed to be burned away and transformed.

Perhaps most importantly in this story and analysis of the “waking dream,” is the river.  The river really was our life-line. Only after we let go and flow with the river are we rescued. If this were an actual dream, it is what would be considered in the language of Jungian psychology and dreams, as being a “big” dream. It would include layers of meaning for the dreamer to consider for many years into the future. Indeed, when looking back now, this adventure did in fact act “as if” it were a “big” dream. After this experience, my life did begin to change dramatically, and I could say now that it was around this time on the Missouri river that I began to live more balanced with my unconscious and instincts. This way of living my life connected me closer to the great river of my own life. The decision that Steve and I arrived at to enter into the heart of the Missouri river in hope of rescue most likely was the best decision for our story, and perhaps even saved much future suffering for us and our loved ones waiting at home worrying.

For psychotherapists, working with our client’s “waking dreams” can add another dimension to our work. For those clients who do not recall or report regular night-time dreams, working with “waking dreams” may help them to access important symbolic experiences that can facilitate the individuation process that may otherwise appear to lack a necessary depth. The stories of our lives have much to offer, and they have even more rich layers of meaning waiting to be explored.