The Psyche at Dawn and Dusk: A Look at Crepuscular Moments

Any fisherman or fisherwoman knows that fishing is best at dawn and dusk. Similar to the feeding behavior of fishes, other wildlife is most active at twilight during those precious crepuscular moments. Crepuscular is a term used in biology to describe animals that are active during twilight.  Nighthawks, deer, bats, and fireflies, are all examples of crepuscular species that “come to life” during the transitions of night to day and/or day to night. 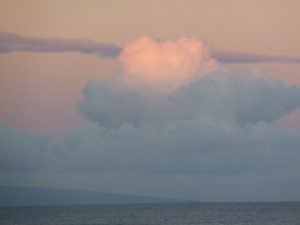 The transition from night to day, from dreaming to waking consciousness, is ripe with potential meaning. Hypnopompic imagery and lingering dreams can be expressions of the psyche at dawn. Like morning birdsong, there are brief moments too when the psyche can sing a melodious song before the demands of the day arise. It is a good time to take a moment to reflect on your dreams from the night before and to write them down in a journal. 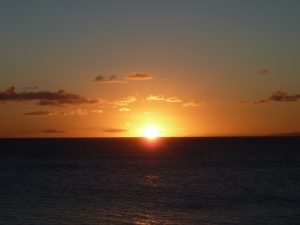 The transition from day to night, from waking consciousness to the dream world, has a different kind of feel from that of dawn. Living in a coastal neighborhood, I witness many people with an evening ritual of going for a walk to watch the sun setting over the ocean. The psyche is still drawn to such rituals. Crepuscular rituals like watching the sun set help to draw us closer to each other, to nature and to the natural rhythms in our lives.

As the photo below demonstrates, twilight is a stimulus to constellate feelings of love and bonding with one another. Lovers embrace as the sun sets over the Pacific ocean in Santa Cruz, California. 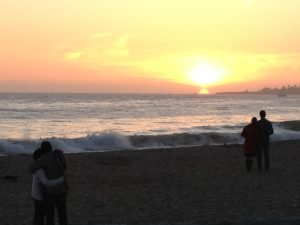 As we are falling to sleep, hynogogic imagery and thoughts and concerns from our day may linger. Some people have difficulties falling asleep as they toss and turn struggling to let go of the day and enter into the world of unconsciousness and sleep. Sundowners syndrome, a condition of some elderly people with dementia, can consist of mood swings, confusion and strong emotion, that is correlated to dusk. The reason for this is not all so clear.

What is clear is that the psyche, the mind and the body, has a subset of expressions at dawn and dusk. A brief look at crepuscular moments, those precious and sacred moments on both ends of the sun’s journey across the sky, show that what happens at twilight, such as early morning birdsong and lingering dreams, is special and is worthy of our attention. In other words, if we miss out on the dawn and dusk in our lives, we may miss out on an important window into the unconscious and a window into some of Life’s most precious and insightful moments.

of the sun’s journey