The Old Man on the Point: The Wise Old Man Archetype

The old man lived on a wooded point of land on a deep glacial lake. His home, close to the water, yet still partly hidden by pine, oak and ash trees, was modest. It was wood, two stories, with a large picture window overlooking the water. There was a two foot rock wall, which he built with his own hands, in front of the window and between the grass and shrubbery leading to the water’s edge. 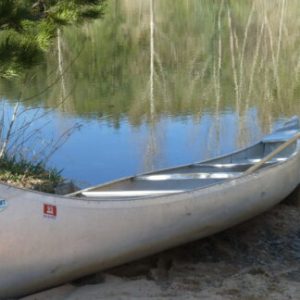 We visited the old man when we could. Between our cabin and his home was a heavily wooded parcel of land. When we visited the old man it was almost always by canoe. We sometimes found him out back, behind his home, in a large workshop where his many tools were meticulously placed in their proper place. He had learned the trade of blacksmithing later in life, and he would sometimes fix things for us.

At other times when we visited, we would sit on the rock wall in front of his home, and he would give us some peanuts from his pocket to feed the resident chipmunks. He showed us that if you were very patient, you could get a chipmunk to run straight-up your leg and take a peanut while sitting on your shoulder. There were also many more birds around his home than was typical for even a natural, wooded area. He had many bird feeders that he made and placed in strategic locations which would permit close viewing. We could sit inside of his home and see chickadees, pine siskins, goldfinches and other birds at his feeding stations. The birds would actually enter into the glass jar feeders that were hanging from an angle so that the seeds would not spill out. The small, colorful birds would gather the sunflower seeds from the inside of the hand-made glass jar feeders at distances of only a few feet away from our wondrous eyes. The old man had a relationship with animals that reminds me of the legends of Saint Francis of Assisi, the patron saint of the animals. Like Saint Francis, there was an aura of holiness surrounding the man.

When I think of the old man now, I recall sitting in his living room in the early spring with my father, in front of a big picture 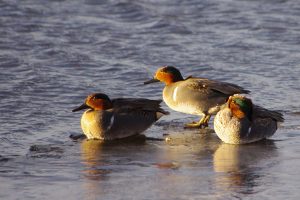 window, watching the ice recede, and the frigid waters reclaiming what they could before the next freezing night. I remember looking out the window and seeing the first ducks of the year, in their brilliant breeding plumage, sitting on the edge of the ice. The old man would point to the birds, telling us when they arrived to the lake this spring, and how this year’s arrival time compared to last year. He would take out his old, weather-worn and leather bound bird books and let us browse the pages. There were many hand-written notes from him in the margins of the books, next to the different birds that he had observed over his lifetime.

The old man fascinated me. I wanted to visit him as often as I could, and couldn’t wait for the next visit. Of course, I didn’t know it at the time, but for me, he symbolized the Wise-old man archetype that psychiatrist Carl Jung discussed. An archetype can be an innate image or potentiality and pattern of behavior. When the right situation presents itself, it can trigger the activation of the archetype and the behavior and affect associated with the archetypal pattern which has been “lying dormant” in the psyche.

According to Jung, the Wise-old man for a male, or Chthonic or Great mother for a female, is an archetype in the personality development inherent in the process of individuation. In addition to the Jungian archetypes of the shadow, anima, and animus, Jung labeled the missing fourth element in the quaternity the Wise Old Man or the Chthonic Mother (Robertson, 1995). The development and integration of archetypes is a life-long process. Mattoon (1981) said, “As each of these archetypal contents is encountered, consciousness is broadened and deepened, and the ego is placed in perspective, taking its rightful place as subordinate to the Self.”

Dr. Jung himself had a wise-old man figure for him whom he named Philemon. Philemon, who had the horns of a bull and kingfisher wings, came to Jung in a dream while he was going through a very significant phase of life. After this dream, Philemon remained as an important inner figure for Jung and for the remainder of his life, Philemon served as an inner guide with superior insight.

In addition to real life relationships where a living older person may become symbolic of the wise-old man for a younger individual, the wise-old man archetype will sometimes present itself in our night-time dreams, as they did for Jung in the above description of Philemon. Other examples could be to dream of Merlin, Einstein, or any other person that holds a similar kind of knowledge to us as individuals and/or who is embodied in our greater culture.

The old man on the point was certainly such a figure for me. He embodied the wise-old man archetype that Jung wrote about. In the language of Jungian psychology, we could say that a positive transference had occurred for me with the old man. Transference is an intense type of projection. When such a psychological dynamic happens, it can bring with it potentialities for psychic transformation, and in particular it can be involved with the emergence of archetypal themes (Edinger, 2002). Relationships are a necessary ingredient for the development of the phenomenon of transference.

Though transference certainly played a large role with my experience and related feelings with the old man, it was more than that. To label such significant encounters and relationships in our lives as “only transference,” minimizes the importance of these relationships. Of course transference is occurring, but more is happening. Our significant archetypal relationships are also composed of a transpersonal element that can help lead to transformation. A spiritual component can be said to be lying dormant, waiting for the right stimuli or significant person/relationship to come along, which helps us then to live our lives more intensely.

The old man on the point also embodied the essence of masculine energy for me. He was a man who had lived an interesting, full life as a small town successful businessman, who in the process had acquired wisdom and a unique, secret knowledge along the way. He appeared to follow the threads that lead him into many diverse, earthy, and grounded ways of living. For instance, he forged metal in his shop and was available to help his neighbors with minor jobs and projects involving metal. He was also a local historian, and as mentioned earlier, he was a naturalist with a specific fondness for birds. The animals around his home even seemed to behave differently.

Ideally, we all need people like my childhood and adolescent neighbor, the old man on the point.  We need them to carry the image. For me, the old man was a wise-old man and a holy man. Whether they are aware of it or not, they help to form us, to activate latent potentialities deep inside of us, waiting for the right relationship and encounter to occur.

The old man on the point died many years ago. I was told that he died peacefully in his sleep after a brief illness. It has been over twenty years since I have seen the old man, but I still think about him. Some of the interests and passions that I have now were formed early in a myriad of ways, but included my interactions with and fantasies about the old man during my early formative years. The wise-old man or Chthonic/Great mother archetype is a potentiality that can serve an important role in our development. Ideally, this potentiality should be honored and integrated over the course of our lives.  It can be a significant piece to our call to wholeness, helping to carry us into our future that is waiting.