The Mortificatio: Death and Dismemberment Dreams and a Coffin in the Backyard 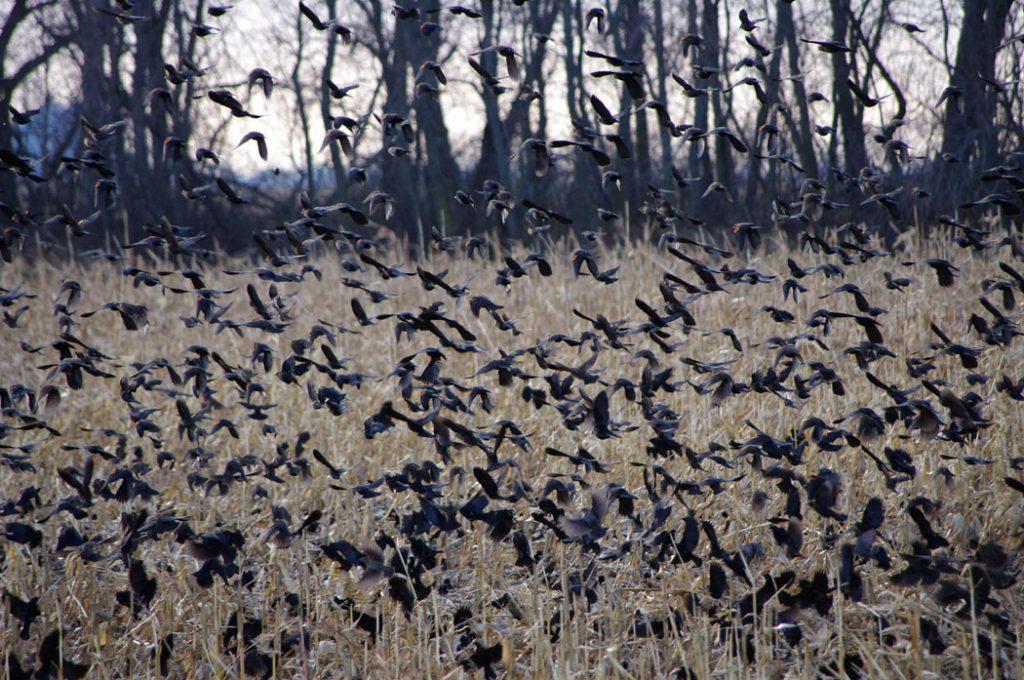 Blackbirds and the nigredo of mortificatio*

This is not a summer article. Yet similar to how life’s hardships and imagery through dreams and the unconscious can interrupt our lives at any time; this topic seems relevant now, even in the middle of the summer, and after a horrific event like the massacre in the movie theater in Aurora, CO. I had started writing this article about one month prior to the killings in Aurora, but put it aside until now. What happened in Aurora, struck home to me as I have friends and family in the area.

This article is about the most negative stage in alchemy, the “mortificatio.” Mortificatio is associated with blackness or “nigredo,” death and dismemberment and those areas of life that most of us living in North America are not exposed to on a regular basis. Of course there are exceptions. Most of us, however, try to avoid the unpleasant imagery associated with death.

Unpleasant as such imagery is, it is nonetheless woven into our dreams and nightmares. Carl Jung found that there seems to be deeper meaning associated with death and dismemberment imagery. Jung discovered that on one level, alchemy was not only a precursor to modern chemistry, but that it revealed a deep and projected psychological process. In other words, the alchemists projected their own psychological developmental onto the contents of their experiments.

Jung found that the stages inherent in alchemy contain categories and imagery associated with his own ideas around his own concept of individuation; a person’s unique development across the lifespan. Alchemy can be a kind of map of individuation.

In North America, and throughout much of the developed world, we have neatly brushed aside death. Yet, even here, some people are exposed to death and dismemberment imagery on a somewhat regular basis. I have counseled some of these individuals, many of whom are haunted by the images that they have witnessed.

Some workers encounter death and dismemberment imagery in the line of duty. For example, police officers sometimes come upon the scene of  horrible automobile accidents and the victims. Morticians work closely with the dead. Hospital emergency room staff may be in the direct line of sight of death and dismemberment, as are some of our combat military men and women.

And then there are the victims who are exposed to traumatic scenes of violence when they are least expecting it. This article is not necessarily about the isolated acts of evil and/or insanity that explode into the lives of the unfortunate. But I have included reference to Aurora, CO, and these deaths, because it is yet one more example of how violent scenes of death and dismemberment creep into the collective psyche.

As for the rest of us, we are sometimes exposed to death and dismemberment images in our sleep—even when we have never witnessed such imagery in our waking lives. The psyche contains a reservoir of all of the imagery that humankind has experienced and witnessed over time.

Jungian psychology is a field of psychological study that has attempted to map the imagery from the unconscious across the lifespan of the individual. Carl Jung found the ancient practice of alchemy to be an area that surprisingly contains many of the constellations of images that can occur over the course of an individual life.

Jung became fascinated with alchemy sometime after undergoing his well-known split with Freud. Essentially, Jung spent the remaining years of his life studying and learning about this ancient practice. Schwartz-Salant (1995), a Jungian analyst, noted that Jung said about alchemy in Jung’s Religious Ideas in Alchemy from his Collected Works:

It should now be sufficiently clear that from its earliest days alchemy had a double face: on the one hand the practical work in the laboratory, on the other a psychological process, in part consciously psychic, in part unconsciously projected and seen in the various transformations of matter. (p. 65)

At its core, alchemy is about turning a base metal into gold. There are a series of psychological stages present in alchemy described in great detail by some Jungians, and in particular, in the classic Jungian alchemical text by analyst Edward F. Edinger, Anatomy of the Psyche: Alchemical Symbolism in Psychotherapy.

One of the stages in the alchemical process, which was Jung’s attempt to map and categorize some of the many images present in the unconscious psyche, is the stage of mortificatio, and which is the specific subject of this article. Edinger (1985) said that mortification literally means “killing” and refers to the experience of death. He said:

Mortificatio is the most negative operation in alchemy. It has to do with darkness, defeat, torture, mutilation, death and rotting. However, these dark images often lead over to positive ones—growth, resurrection, rebirth—but the hallmark of mortification is the color black. (p. 148)

Those of us practicing psychotherapy are sometimes witness to our clients’ mortificatio imagery that present in night-time dreams and other experiences. A male client’s dream illustrates mortificatio imagery quite nicely. He had been feeling depressed and complained of many somatic concerns such as severe muscle aches and pains and general body weakness with fatigue.  He even wondered if he was dying. Then he dreamt:

I was walking down the street and someone was throwing the dismembered body parts of a person or dog onto the street. Then I ended up in a city library to study, though there was no room at the table. I was talking to a pretty blonde reporter (who had a booger in her nose) and told her about the body parts. She went to get the story.

When his dream is examined, it is no wonder that he had been feeling this way.  He was being “dismembered” psychologically. When this mortificatio imagery was explored during psychotherapy, it brought meaning to his body experiences, and several weeks later, the severity of the symptoms dissipated. Through the psychotherapeutic work, he was beginning to embrace a new vision for his life, while letting the old vision die.

In another dream, we can see the death imagery again. Another person, this time a female, who had been significantly struggling in her relationship with her partner, dreamed:

My dead mother’s coffin is in the backyard. I saw it move several feet. I told my father about this, and he said he sometimes “felt” my mother in the neighborhood at times. We went to the backyard and someone had put in fruit and notes “as if” from my mother. (I think it had been my Aunt and Uncle.) They blessed all of us and our partners. My dog had tears in his eyes. I started to sob briefly. I noted in the corner of the yard that the landlord had recently cut down a large tree without anyone knowing. I think it was a flowering tree like the Magnolia.

While working with this dream, she saw that among other things, she needed to let go of her expectations about her relationship and learn to view it in another manner. She realized that something there was dying, and she needed to move forward with her life nonetheless and regardless of the desired outcome.  This dream with the death images (coffin in the backyard, cutting down flowering tree) and the associated emotionally laden imagery (the dog’s tears and her own sobbing) helped her to bring the needed affect into her processing of the relationship and the end of a phase.

Why do we experience such dark death imagery even if the imagery has no direct connection to any of our previous experiences? The central theme of mortificatio death and dismemberment imagery and its corresponding life phase, is letting go of the old. In other words, we can’t hold on to certain phases of life for too long, or the psyche will dismember us.

For the above dreamers, their dreams contained important messages for them, suggesting that they were in a process of death and renewal. For them, it is a time when old parts, old attitudes, are being taken apart. And because almost everyone is tasked with change from within and/or without, most everyone will at one time or another have dreams that are harbingers of such a change process.

When we accept and become conscious of these processes within, it helps us to understand what is happening in our lives, with our bodies, and with our suffering. Through his study of alchemy, Jung was able to provide another map that reflects natural, psychological processes that have both greater meaning contained within and helps assimilate some of the “whys” of traumatic experiences that occur without or through our daily life experiences.

Edinger (1994, p. 71) wrote that Jung said about mortificatio, “The integration of contents that were always unconscious and projected involves a serious lesion of the ego. Alchemy expresses this through the symbols of death, mutilation, or poisoning.”

The above photo is one that I took on a trail close to my home. The flower in the picture is a Calla lily. Surrounding the lily is a mass of Poison Oak and thorns from Blackberry branches. The image and its message perfectly illustrate mortification—a thing of softness and beauty is possible even in the midst of a poison or mortificatio phase. (Interestingly, even the Calla lily is poisonous, but unlike the Poison Oak, only if actually ingested.)

Most of us do not naturally gravitate toward the theme and imagery of death and dismemberment. Yet, they are as real a part of what it means to be human as the themes of love, joy and compassion. Ideally, we should not run from death—the blackness that enters our lives at certain times. If you monitor and honor your night-time dreams, there is a very good chance that you can discover a greater purpose to these symbolic death images and experiences in your life.

To dream of your own self (or another) dying, rotting or being mutilated and dismembered, presents a paradox. There can be real suffering and a very real symbolic death is happening. A death to the ego is underway. But these dark images can lead to new growth and a psychological rebirth.

Edinger (1994, p. 72) writes about the mortificatio, “the idea is that putrefaction which stinks and is foul brings about sweet and soft consequences.” This is no sugar-coated philosophy of making good out of the bad, but a general law of the psyche; a law that nature teaches by example time and time again throughout the course of the ages. If you are going through a symbolic death phase in your life, it is possible to both endure this difficult time and to find meaning in the process.