The Ghost of Ed Ricketts 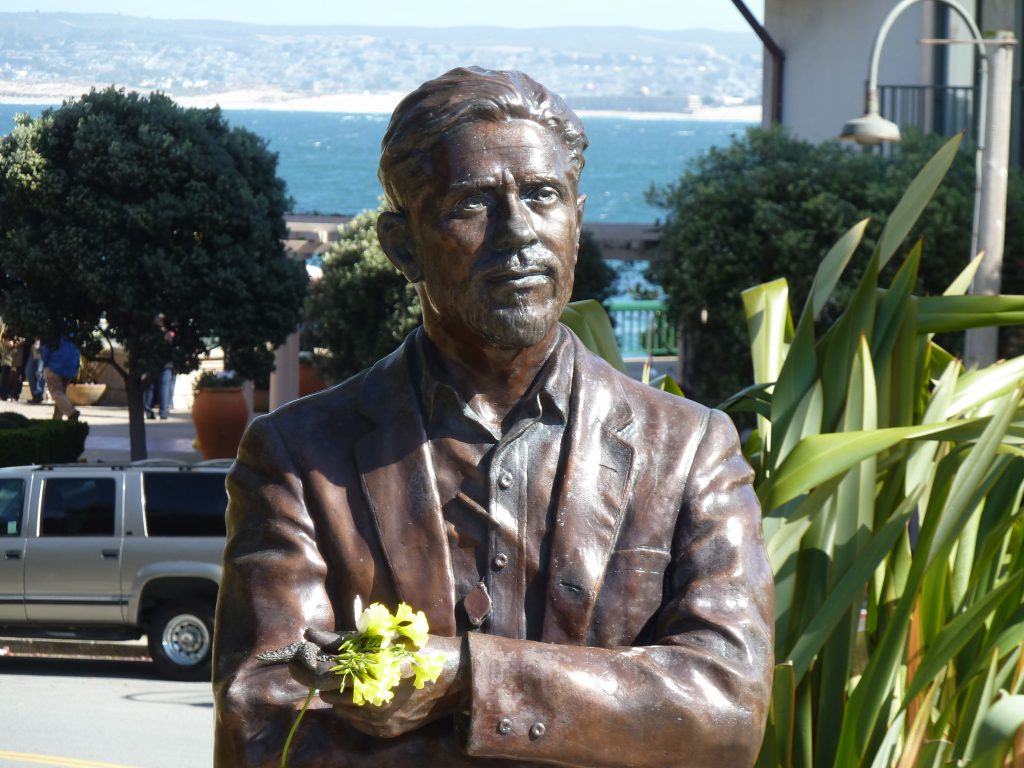 I have written about Ed Ricketts before. His life and story still haunts me. Perhaps this is because I need to continue to write about his story and his work.  But like all great mysteries, my quest for understanding what Ed Ricketts means to me must be honored.

For those that do not know about this biologist, Ed Ricketts was the Pacific coast and Monterey Bay area marine biologist and ecologist who died unexpectedly at age 50 on May 11, 1948, when his car was struck by a train. Ricketts was also a man who had a profound influence upon many artists, writers, and scientists, including the author John Steinbeck and the mythologist Joseph Campbell.

Not long ago, I had a dream about Ed Ricketts. In the dream, I was in both a house and a play with Ed.  Ed used to live in the house that I was now in and I felt his “ghost” there.

As you can see, the dream even referred to Ricketts by his first name only, as if I had some kind of personal relationship with the man. Of course, in dreams, these things are true.

Joseph Campbell (1988) said in The Power of Myth that one of the big problems in a young person’s life (I would change “young person’s life” to “any person’s life”) is to have models to suggest possibilities. Perhaps that is what Ricketts is for me. He serves as a model to suggest possibilities. Ricketts has been, and continues to be, I suspect, a model for many. There is an article on Ricketts that even discusses the idea of “Ed heads”—those who for one reason or another are intrigued by the guy.

For me, part of the pull towards Ricketts may also include some similar histories. Like me, Ricketts came to the Monterey Bay area via the Midwest. He spent most of his early years in Chicago, but at age ten and with his family, he even spent a year in Mitchell, South Dakota, the state of my birth. It was in South Dakota that his love of the natural world seemed to take hold.

Ricketts did his undergraduate schooling at the University of Chicago but never completed his degree. A significant influence upon Ricketts while attending school in Chicago, however, was the influence of the pioneering ecologist Dr. Warder Clyde Allee. Contrary to Darwinism, Allee proposed that life wasn’t only about competition and survival for existence, but that there was also an unconscious element within organisms that sought cooperation, such as through the formation of aggregates, that would not only help the group, but also the individual (Tamm, 2004, p. 9).

Partly due to Allee’s ideas and influence, Ricketts as ecologist, was one of the first to classify marine organisms by habitat and behavior rather than straight taxonomy (see the seminal text Between Pacific Tides by Ricketts and Calvin, 1968). Organization by taxonomy was considered the only truly “scientific” method at that time. Ricketts’s novel approach was a huge step in the field of ecology actually, and one that caused him much push-back from the academic community, I am sure. Ricketts was also looked down upon by some academics as he was without degrees and significant formal training.

Ricketts, writing about Monterey Bay, was also was one of the first to warn about the hazards of overfishing and the sardine industry. Once again, I would guess that he took considerable “heat” since he took a stance contrary to popular opinion.

I attended a lecture in Santa Cruz by a marine biologist who talked about current environmental issues related to the health of the Monterey Bay. In this lecture, this noted biologist explained that when he thought of the ecological problems of the Bay and strategized possible solutions, he liked to imagine these problems and solutions in a way that he thought Ed Ricketts would have imagined them—in a series of interconnected links between the organisms and needs of the Bay and its animals, and those of the people around the Bay’s shore.

Some people know that Ricketts had a long and deep relationship with John Steinbeck. Some of Steinbeck’s novels even contained the fictionalized character of “Doc” based on the likeness of his good friend Ricketts. Not as many people know that Ricketts also had a profound influence upon Joseph Campbell. In 1932 Campbell and Ricketts went on a ten week marine animal collecting trip together in Alaska. Ricketts was seven years older than Campbell, and seemed to have served as something of a mentor for Campbell.

Campbell discovered much about himself during that time while being influenced by Ricketts, their travels and the collecting of marine organisms. Tamm (2004) wrote that Campbell said about Ricketts and this trip:

I have still a deep nostalgia for those wonderful days when everything that has happened since was taking shape. That was, for me at least, the moment of the great death and re-birth that Jung is always talking about, and all of you who were involved in the ‘agony’ are symbolic dominants of what is left to me of my psyche. Monterey Peninsula is the Earthly Paradise. (p. 17)

I wrote my first article about Ed Ricketts, which is archived in this blog, in October, 2011. Its title: Living by the Tides: Ed Ricketts, John Steinbeck, Joseph Campbell and Jungian Psychology. One reader left a comment about this article that stands out. The reader, Mary Jane, said:

Amazing how Ed continues to reach out and touch lives. My masters painting thesis was about how the “ghost of Ed,” along with a few Jungian ideas and fish imagery, shaped/shapes my psyche. I did make it to the Great Tide Pool and recently to Vancouver Island. Now our 16 year old is being introduced to Joseph Campbell, by way of Bill Moyer’s series, and the cycle continues to the next generation. Wonderful.

Shortly after I wrote the October, 2011, blog post, I was at a neighborhood Halloween party. I live in a coastal neighborhood and many who live here are tied to the sea through work, play, or both. At this party, I was introduced to a person who had only recently moved to the area. During introductions, he said that he was a marine biologist who worked at a local marine biology research station. I commented that I had just written an article about the marine biologist, Ed Ricketts. My new neighbor then said that interestingly the marine station where he now works has a new remotely operated submarine that is named the “Doc Ricketts.”

A more fitting image and symbol for Ricketts could not be imagined. A submersible named after him that is utilized to explore the deepest underwater canyon on the Pacific Coast of North America would have amused Ricketts, I would imagine.

If you read much about Ricketts or read any of his own written work, it is clear that Ricketts was among other things, an explorer of the depths of human nature.  It could be argued that for a marine scientist of his time, Ricketts had uncharacteristic interests and passion for ideas expanding into far ranging fields like literature, art, poetry, music, and psychology–including Jungian ideas. He seemed to have explored the depths within himself as much as he adventured without. He wrote one essay on poetry titled, A Spiritual Morphology of Poetry and another on life and human potential called, The Philosophy of Breaking Through, which has tones of Jungian thought. Ricketts (1940) said:

…the issue of the union of two struggling opposites each honest in its own right but in scope limited, as a ‘new thing’ which completely transcends the old, which is part of it in a rooty sense only; which uses the old forms of duality—form and function, matter and energy, material and spiritual—only as emergence vehicles toward an integrated growth. (p. 104)

In psychology, the mechanism of projection can sometimes explain the strong emotion and feelings we put on another. Projection is an important idea that can sometimes help us to understand why it is that certain people, ideas and images draw us in and take hold. The psychological mechanism of projection perhaps explains some of what Ricketts’s image does for me–but that reduces the pull and mystery of Ed Ricketts for me into a “mechanism” that is actually a poor description of an image, like Ricketts, that came to me in a numinous dream.

There is something much larger at work here. It is in the realm of the transpersonal, the mysterious, that we find many of the subtle factors that shape us over time. It is the “ghost of Ed Ricketts” that continues to hold influence for not only myself and for artists like “Mary Jane,” but even for Monterey Bay and its current problem-solvers, as evidenced in the lecture that I attended by a prominent marine biologist. 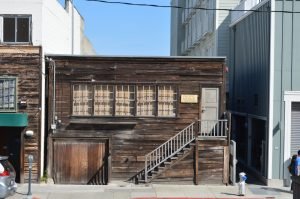 If you walk down present day Cannery Row in Monterey, though it no longer even remotely resembles what it was like when Ed Ricketts lived and worked there, you can still see Ricketts’s presence in the form of his old lab building. The old, rustic, wooden, lab building, “Pacific Biological Laboratories,” is still there nestled amongst modern buildings that are all mostly now catering to the tourists. Farther down the path is the bust of Ed Ricketts memorialized at the spot that he met his untimely death.

Sometimes the psyche will utilize a person, or an image of a person, as an image to pull us into our future. To become all that we are capable of becoming, we are not only pushed from our past, but we are just as equally pulled by our future. Dreams not uncommonly hint at this idea, but this is a topic for another article. “Models to suggest possibilities,” as Campbell so aptly put it, are utilized by the psyche for almost all of us to help us to become more whole and more attuned with our deeper selves. As sometimes revealed in night-time dreams, the people, the “models” that we are drawn to can guide us further down our own unique paths. Ricketts was and continues to be a model to suggest possibilities not only for myself, but for many who have discovered his work and read about his life.

Not only do some people serve as models for us, but the historical Ed Ricketts and his ground-breaking ideas influence how we think about the interconnectedness of the people, the land and the sea. The “ghost of Ed Ricketts,” the transcendent mystery of Ed, is pulling especially those of us living around the Monterey Bay region, into imagining and working toward a future with a cleaner ocean, and a healthier ecosystem–a future that our descendants expect from us–and a future that I suspect Ed Ricketts would have wanted. 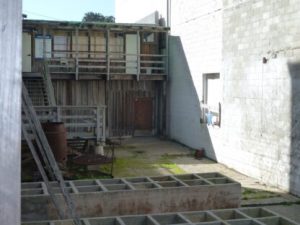 The lab from the oceanside. (Note the grid of concrete that held animals that Ricketts collected.)