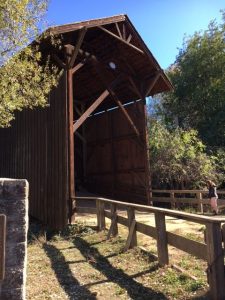 Of course as with all dream images, images and the meaning are unique to the dreamer and his or her unique life circumstances and psychology.  Common images like bridges, however, can also be discussed more globally as starting points into an understanding of dreams and a dreamer’s inner life.

The photo above is an old covered bridge in Felton, California that crosses the San Lorenzo River. The bridge dates back to 1892. At one point in time it was the only entry into the town of Felton.

A client dreamed that there was a bridge over a great river and he was standing “frozen and terrified” in the mid-point of the bridge. He was in the midst of a significant possible change in his life and the dream depicted with precision the emotional state that he was experiencing. Exploring this dream helped him to be more open to discussing the strong emotion he had around his situation.

In another bridge dream, the dreamer was at the starting point of the bridge slowly walking toward the other side. On the other side of the bridge a young family was depicted in a joyous place in their home.  This dreamer discussed her deep and long-held desire to have a child and family. She talked about how the dream gave her hope around this deep desire.

The bridge, as a symbol of a transition or link between different psychological phases of life or possibilities, is an image always worth exploring in-depth when it presents in a dream.

Beckons to something other