The Archetypal Way, the Serpentine Way and the Paradox of the Self

“There is a good thing on top of that mountain. I will make a straight line for it.” But the archetypal way is not like that; it is a serpentine way that wriggles and spirals its way to the top. We often feel defeated by it and brought to a standstill. It makes most people terribly impatient and even desperate when nothing happens and they get nowhere. They feel hindered all the time; they don’t understand that this is just as it should be, that it is actually their only chance of getting to the top. (C.G. Jung, The Visions Seminars, Book Two, p. 295)

The above quote by C.G. Jung in Book Two of The Visions Seminars so aptly describes the archetypal way and process contained within Jungian psychotherapy. The archetypal way is not like the straight line to the mountain top. It is more like a 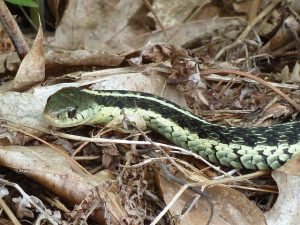 path similar to the serpentine path of a snake. Similar to how the snake winds when it moves, the archetypal path wriggles and moves from side to side reaching its target and goal nonetheless.

The Self exists independently of our egos, yet paradoxically, we also create the Self. This kind of paradox fits nicely into the archetypal, serpentine way of the psyche.

A client dreamed of being at work and touring a room with a nuclear reactor in the center of the room. In the dream, the client felt like she had helped to install the reactor, and therefore she felt a sense of ownership.

This dream beautifully illustrates the archetypal way and the paradox of the Self. On the one hand, we have the image of the nuclear reactor operating independently in the center of the room. On the other hand, we have the dreamer’s feelings that she helped to build it, and in fact she even felt some ownership toward the reactor.

Your unconscious provides imagery through dreams, fantasy, and other unconscious modes to help facilitate and guide your way. Being conscious and engaged with this process will assist you in navigating the archetypal and serpentine ways of the Self and its goal of wholeness.

If you choose to embrace a life lived the archetypal way, it will likely be a life filled with both real and symbolic mountain tops and valleys. There will be times of desperation and frustration when you feel as if nothing is happening. But your deeper Self, the organizing center of your personality, is still working in the depths. There is a process and energy center “underground,” like the nuclear reactor image from the above dream.

You can choose to take the straight line, ego way toward a far off goal, toward your mountain top, but like the recent experiences of ego-driven Lance Armstrong demonstrate, this way is not the best way. But it is a way full of false promises and it is almost guaranteed to fail in the long run.

The archetypal way, the serpentine way, is a way full of paradox—similar to the nature and function of the Self.

The archetypal way will require faith in the process, perseverance, and the ability to withstand times of uncertainty when you feel both defeated and as if your life has been brought to a standstill. It is during these times of doubt that you will need to recall that your deeper Self is still working toward its goal of wholeness. To paraphrase Jung from the beginning quote, the archetypal way, with its wriggles and spirals, is really the only chance that you have of getting to the top of the mountain.