The Alchemy of Sea Glass: From Junk to Jewel 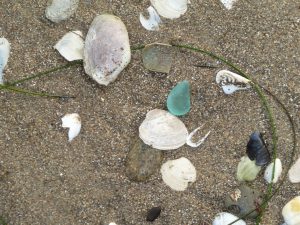 How is the archaic and symbolic process of alchemy demonstrated through human behavior in modern times? An excellent example is the more recent phenomenon of the coastal quest for sea glass.

Living by the sea, I have been a regular observer and participant in the practice of combing the beach for sea glass. This activity has grown in popularity in recent years. Finding sea glass is particularly fruitful after large winter swells and storms. During these storms, the powerful and pounding surf crashes again and again into the ocean floor dislodging and bringing to the surface stones, shells, and sea glass from below. After the storms clear, the water recedes, and precious jewels of sea glass are exposed. People collect this glass and bring it into their homes and outdoor patios where it is displayed like fine art.

On an outer relationship level, this dream seems to be suggesting that although it may feel to her that her relationship is like a “dried up river bed,” there is still something of value in the relationship  as represented by finding the colorful red and blue sea glass with the white lines connecting each of them. About one month later she had a second, follow-up sea glass dream:

Andre and I find a lot of sea glass.  I show him the two pieces that looked like the ones from my dream of the glass in the dried-up river bed.

These dreams illustrate how the psyche can use a valuable object to our dreamer, like the sea glass, and weave it into her own specific life situation helping her in making decisions in very important areas of her life.  In this case, the psyche is suggesting that it may not be right for her to give up on her relationship.

Individuals searching for sea glass at the water’s edge are engaging in a symbolic process similar to the process that the alchemists practiced years ago. The alchemist’s purpose was to turn base metals into more elevated forms, like gold. This transformation occurred in the alchemist’s fires, where the metal was worked on by pressure and fire and gradually transformed into something precious.

Carl Jung described thoroughly the ancient practice of alchemy, the precursor of chemistry, as being the symbolic equivalent of the Jungian process of individuation. The alchemists, he said, in addition to the more practical chemical reactions generated in the laboratory, projected their own inner lives into the transformation of base metals into gold. Inherent in the concept of the Jungian individuation process is the notion that the unconscious works with and on the contents of the personality to turn the psychological equivalent of a base metal into gold. This transformative process is at the core of Jungian psychotherapy and it is a significant goal inherent in the individuation process.

Similar to how the unconscious works on the personality, particularly with an individual who is engaged consciously in this process, the sea works on transforming 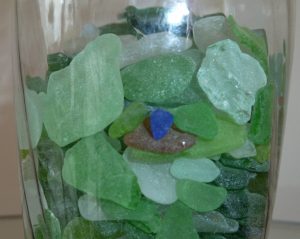 discarded sea glass into smoothed, rounded, and colorful gems. Each discovered piece of sea glass is entirely unique just like the uniqueness of each personality and their individuation process.

A piece of sea glass is polished smooth on its journey from junk to jewel. This journey for the glass can be harsh at times while the glass is being churned over and over by the pressures of water and sand. Water and sand work on sea glass as pressure and fire worked for the alchemists in the transformation of metals. Also similar to this is the manner in which a personality is “churned” by life and has the potential to be polished by pressure and “fire” into a personality that is a more honest expression of the soul. The individuation process inherent in Jungian psychotherapy is a fitting container for this transformation.

With the gathering of sea glass we see the presence of an archetype in action. We see an expression of how the Self guides people to work on their inner psychological process of turning the psychological equivalent of a base metal into gold. It further demonstrates how this tendency is “hard-wired” into our behavior patterns seeking expression in a variety of actions.

Becoming more conscious of the process of individuation (because it is at work in the unconscious and seeks expression whether sought after or not) helps to integrate the process more uniquely into your life’s journey. Engaging more fully with this process is one of the great joys of life, and brings greater meaning and purpose to the journey. Like the inner work inherent in alchemy, other symbolic expressions, like the modern quest for sea glass and “turning junk into jewels,” will be repeated for eternity as symbolic of turning base metals into gold and bringing the unconscious into the light.