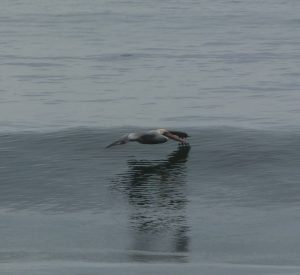 Earlier this year I wrote about the Common Loon, an occasional visitor to Santa Cruz and the Central Coast. A much more abundant seabird in the area is the Brown Pelican. Visitors and locals alike marvel at the beauty of the colorful pelican as it glides along the coastal waters and bluffs.

The descriptors “white” and “brown” underestimate the color and beauty of pelicans.  White pelicans are brilliantly white, with dark black wing tips, orange-yellow bills, and with yellow around the eyes.  In their brightest breeding plumage, Brown pelicans, the smallest in the pelican family, have a golden-yellow head with bright eyes, a gray-brown and silver body, with an orange-reddish bill and pouch.

I have been observing pelicans almost my entire life. As a teenager and young adult I watched White pelicans on Glacial lakes and marshes common to the Northern Plains where I was born. Later, as an adult after moving to the West coast, I was equally drawn to observing and learning the habits of Brown pelicans. The ethology of pelicans is quite interesting. Both Brown and White pelicans are absolutely dependent on water for survival. Both feed primarily on fish, but have very different methods of catching their prey. White pelicans scoop the fish near the surface of the water. At times, they congregate and “herd” their prey together driving the fish to the surface making them easier to catch by eliminating a route of escape. On the other hand, Brown pelicans dive for fish from as high as sixty feet in the air in an acrobatic display that is a thrill to watch. They hover above the water for a brief moment and then plunge straight down into a “perfect” dive. Brown pelicans are almost never found far from the coast. Contrary to this, White pelicans travel for vast stretches over land on their migration from summer to winter feeding grounds.

During the winter, White pelicans can also be found occasionally in the Central coast area frequenting coastal marshland. Sometimes flocks of White pelicans fly so high in the sky that they appear only as “specks.” Watching this display with binoculars is mesmerizing. It seems as if they are simply enjoying the ability to glide in circular motions gracefully high up in the sky. Brown pelicans have their own unique flight patterns. They often fly in groups in line formation sometimes coming in wave after wave where the land meets the sea. Additionally, they can be found flying alone or in groups gliding very close to the surface of the water. At other times, Brown pelicans appear to be actually “surfing” a wave while riding the undulating rhythm of a breaking wave in a manner very similar to a human surfer on a surfboard. They can fly so close to the water that it looks like they may actually catch a wing tip and catapult straight into the water. Some of the physics and aerodynamics associated with this flight pattern is to reduce drag since a cushion of air is trapped beneath the wing.

In addition to being extremely interesting and beautiful birds to study from an aesthetic and biological outlook, pelicans also serve as a very important symbolic image from a Jungian psychological perspective.  In that regard, I chose an image of the Brown pelican for the central image on my website homepage. This choice came about synchronistically. I had been thinking about building a website for several weeks and was not sure of the direction to take, or the imagery to use.  One day during this time and while walking alone down the beach, I was again thinking about ideas for a website.  I spontaneously looked up, and a lone Brown pelican seemed as if it was diving straight toward me as it flew closely by and just above me.  I think I may have even ducked.  Just then it was clear to me. I knew that I had my image for my website.  It would be a pelican. On my homepage, the pelican is “surfing” down a wave. Surfing a wave, by a person, or bird, is a powerful symbol for a way to live life, and can also represent the evolution inherent in an individual’s psychotherapy process.

When pelicans appear in dreams they can be powerful and meaningful images. Just by their behavior alone, they represent an animal that absolutely needs the water to survive. The unconscious is often symbolized in dreams by water or the ocean. Individuals, like the pelican, also need an intimate relationship to water (the unconscious) in order to live a balanced and whole life.

It is important to regard the animals, including birds, in your life and dreams as living images. They are “alive” with a psychic energy that may be necessary for your own psychological development. James Hillman (1997) said in his book,  Dream Animals:

Animals wake up the imagination. You see a deer by the side of the road, or geese flying in formation, and you become hyperalert. I’ve found that animal dreams can do this too. They really wake people up. Animal dreams provoke their feelings, get them thinking, interested and curious. As we get more into imagining, we become more animal-like. Not bestial, but more instinctually alive, and with more savvy, a keener nose and a sharper ear… (p. 2).

Whether you live by the Central coast in California or if you are fortunate to live in another part of the country where pelicans frequent, take some time to watch and study this great bird. Pelicans have captivated us for thousands of years and hopefully will continue to do so for thousands more. Be open to allowing the animals in your life, as Hillman says, to “wake up the imagination.”