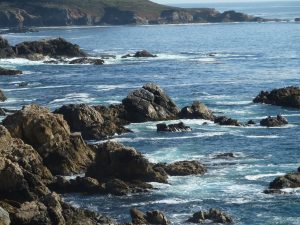 I write alot about the natural world.  I seem to be drawn back again and again to using examples from nature to help people cope with the various sufferings brought to the psychotherapy hour.  As a psychologist and psychotherapist, I’ve found that examples from nature are some of the best metaphors for healing.  Of course, it is most helpful to assist clients with finding their own unique encounters with the natural world and to then assist them in making sense of their own unique hardships.

Perhaps I’m also drawn to writing about nature because of my background as a biologist.  I studied wildlife biology and entomology while working on my first Master’s degree, which I never completed since I switched to the study of psychology before finishing my thesis in entomology.

One of my favorite biologists, who also enjoyed philosophy, was an ecologist by the name of Ed Ricketts.  Ed Ricketts was the real-life person who John Steinbeck based his character “Doc” upon in some of his novels.  Ed Ricketts is something of a hero to some, especially inhabitants of the Monterey Bay area where Ricketts lived in Pacific Grove.  I’ve also been drawn to stories of Ed Ricketts since I discovered years ago that Steinbeck’s character, “Doc”, was based on a real man.

Ricketts appeared to have literally lived his life by the tides.  As an ecologist, he collected and categorized living organisms from tide pools, which he often sold to schools and collectors.  Therefore, his entire livelihood very much depended on the tides.  He had to know precisely at which times certain species might best be discovered at just the perfect tide for that particular species.  His written work culminated in the classic piece of literature in marine biology titled, Between Pacific Tides. (Ricketts and Calvin, 1962). To get an even better idea of the influence in his field that Ricketts had, there are still approximately twenty species of marine organisms that carry the species name of rickettsi or steinbecki.

Stanford marine biologist Stephen Palumbi and Carolyn Sotka in their excellent book, The Death & Life of Monterey Bay:  A Story of Revival, wrote about Ricketts:

Ed looked into these pools and discovered the complex interactions that lived there.  And the rules were intricate. Species did not form a simple food chain where snail eats algae, fish eats snail, and heron eats fish.  Instead they told a thousand stories of the way animals and plants live and die.  Life was affected by the environment: when and where the waves rolled in.  It was affected by the other species present.  And it was affected by chance events and unlikely contingencies.  Ed’s peculiar gift was to be able to see these connections.  His mission was to try to chart and understand them and to explain them to others. (Palumbi and Sotka, 2011, p. 91)

It is also not well known that Ed Ricketts seems to have had a profound influence on not only John Steinbeck, but also on Joseph Campbell.  In the early stages of the relationship between the three, Campbell was becoming something of an expert on mythology, including the psychology of Carl Jung.  In a very comprehensive and readable biography about Ricketts, author Eric Tamm wrote that Campbell once said about Ricketts, “[A]nything from Ed’s lab has fetish value in my life.”  By 1946 the work of both Campbell and Ricketts was gaining momentum and results.   Campbell was planning a visit to Ricketts and wrote in a letter proceeding this visit, “…I am sure that the laws of mythology are the laws of ‘spiritual biology,’ and that a good confab with yourself will make this quite clear to me.” (Tamm, 2004).  The three men became good friends at a pivotal time in their respective personal and professional development.  The intricate and complex interactions in Ed’s tide pools seems to have inspired both Campbell and Steinbeck in their philosophy and writing about mythology and human interactions.

Ricketts had developed his own philosophy drawn from a variety of sources, including Jungian psychology.  He wrote about his philosophy he called, “breaking through,” in several essays.  “Breaking through,” came to an individual only after a person endured hardship and suffering, according to Ricketts.  This meant that after such hardship experiences, a person may have an increased ability for seeing the “whole,” and the greater connectedness of all things.  Ricketts wrote, “For the more you suffer the deeper grows your character, and with deepening of your character you read the more penetrating into the secrets of life.” (Tamm 2004).

The more I read about Ed Ricketts and his life and philosophy, the deeper the connection I see to Jungian psychology.  The way he lived his life has lessons for us all.  Unlike Ricketts, many of us are conditioned to arbitrary time clocks, and not the “time clocks” or cycles of nature inherent in the tides.   Ed Ricketts learned from the tide pools, and from the natural rhythms of the sea.  Some of the great writing about mythology by Joseph Campbell, and the complex human interactions found in John Steinbeck’s novels, can be said to be indirectly influenced by the life-lessons and projections from the tide pools, and the late night talks between three friends. These are some of the important lessons from Ed Ricketts.  It would serve us well if we all made room in our own lives to find a closer connection to “nature’s clock,” and to living by the tides.