In the Middle of the Night: Coyotes, a Synchronicity and the Trickster Archetype 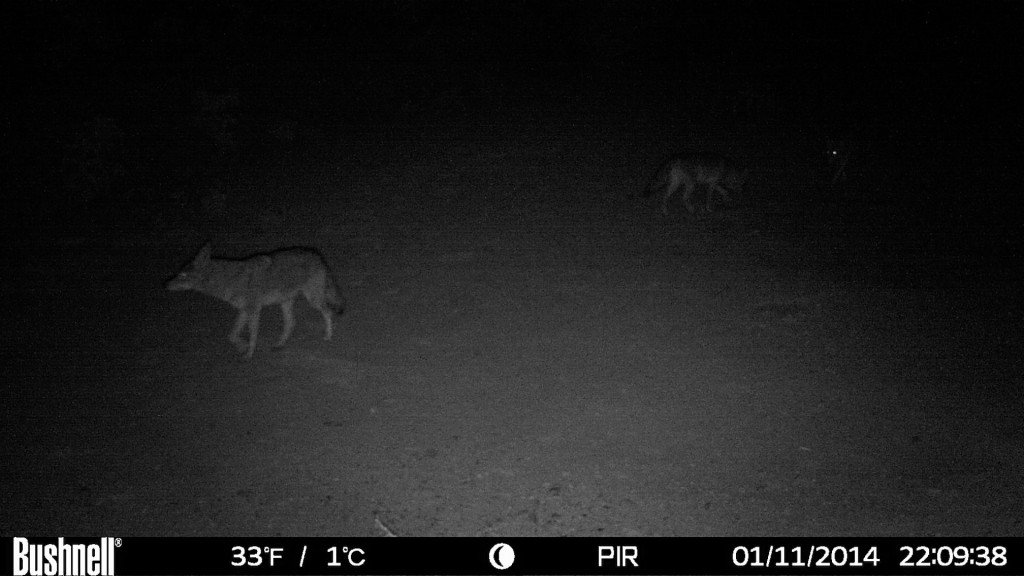 On January, 11, 2014, a good friend of mine who lives in Tucson, AZ, spontaneously sent me a series of photographs taken with a “trail cam.” This camera was mounted in his backyard which backs up to the desert. The photos were all of coyotes in the middle of the night.  I have never before received photographs of coyotes.

On January, 10, 2014, in the middle of the night, I was in the hospital with my wife, involved with and witnessing the birth of my daughter. Shortly after my daughter was born, I stepped out on the deck of the hospital room, and listened to coyotes howl in the surrounding hills. I have never heard coyotes howling in Santa Cruz, CA where I live, though I have seen them.  Coyotes are no strangers to the area since Santa Cruz is nestled just between the mountains and the sea.

I wrote a small poem about the coyotes moments after hearing them while in the hospital:

When my friend in Tucson sent me the photos of coyotes at night, he had no knowledge of my experience hearing the coyotes at night and writing the poem about coyotes on January 10, 2014. This meaningful coincidence is called a “synchronicity” in Jungian psychology. A synchronicity is a meaningful connection between two events. Often it is noticed when an inner psychological “event” (dream, image, emotion, symptom, etc.) is reflected in one’s outer world.

In my own case, the synchronicity was the correlation between the two events of the birth of my daughter, and the coyotes at night. Synchronicities or meaningful coincidences grab our attention and get noticed. Some synchronicities hold our interest for days, perhaps weeks, and sometimes, even throughout a lifetime. Through them, we can find deeper meaning and insight, and sometimes even direction for our lives.  Synchronicities can feel as if we’ve been witness to the realm of the divine.

The coyote historically has been associated with the trickster archetype. Like Hermes, who is a mediator between places such as the unconscious and the ego, or the night and the day, the coyote is an animal with similar attributes. Coyotes are mischievous and cunning. They are often seen somewhere on the “edges” of life, or between worlds. If you do see a coyote in the daytime, the coyote is typically sneaking along the side of a fence or a cluster of trees. It may scurry unnoticed out of the far end corner of a field that you are walking through. In this photograph to the left, I caught a coyote out in the open.

The trickster archetype can be responsible for creative thoughts, ideas, or visions that are outside the norms of society. On the one hand, the coyote, or trickster, can be a reservoir of creativity and vitality and helps to serve as a catalyst for new ideas and visions carrying us into the future. The trickster acts as an awakener between sleeping and becoming more conscious.  On the other hand, the trickster archetype can be responsible for bringing havoc and disrupting the status quo and our false assumptions about security.

The coyote or trickster rules in developmental places or phases of life that seem nebulous and ambiguous. In other words, if you are feeling that your current life phase is extremely uncertain and directionless, it is likely that the trickster is there, since the trickster rules this place.

In my own case, the experience of the coyotes and the synchronicity of the poem with my friend’s photographs, clearly demonstrated to me that the trickster, the coyotes in the night, were lurking. I saw that the birth of my daughter, among other things, symbolized the opportunity for the birth of awareness and a new stage of increased consciousness. The entire experience and associated images proved powerful images for me to work with and contemplate.

In other words, I asked myself, what is it that is new (needs to be ‘birthed’ just like my daughter), and perhaps edgy that my unconscious is bringing to my attention? Like many things on the edge of consciousness, there is a trickster element associated with this material.

Lastly, just like in the final line from the poem that I penned the night of the birth of my child, “the coyotes laugh,” the trickster can bring humor into the world and help us to laugh with life. The trickster archetype is often present when life gets particularly edgy, messy, and uncertain and it can also be associated with new awareness and creative life phases.  But perhaps just as importantly, the trickster, the coyote, helps us with both finding and bringing humor into our world.