Fighting with the Shadow: An Ethological Approach

But before I talk further about using an ethological approach to help illustrate a psychological idea, I want to briefly discuss a concept that is unique to Jungian psychology—the construct of the shadow. The shadow is a prominent archetype that is central to the Jungian process of individuation—the process toward wholeness and individuality.

The shadow is an archetype and an unconscious part of the personality that ends up as the depository of those aspects of ourselves that we find disagreeable. This “disagreeableness” may be due to one or more of a combination of cultural, societal, or family factors that influence (often negatively) developing parts of our personalities. These rejected traits end up in the shadow and are often projected onto others so that we do not need to engage with these disturbing, castaway parts of ourselves.

Unfortunately, when we choose to remain unconscious of our shadow—to not deal with it—we limit our potential greatly, in part, because the shadow also contains creative potential. Furthermore, not integrating our shadow can even do damage to those around us because we tend to project these shadow contents onto others quite easily.

For instance, imagine a teenager who has a budding interest in painting. But because she has “friends” who tease her about this, she gives up on these interests. Later in life, she sees artists as impractical and “out of touch” with reality. She then projects these disowned parts of herself onto others. When she starts to explore this in therapy, and acknowledges her shadow, an untapped creative energy enters into her life along with associated excitement.

Oftentimes, when a person enters Jungian psychotherapy, shadow imagery through dreams and/or behavior enters the therapeutic dialogue rather quickly. A male client, who at the time was a young man in his twenties and just starting psychotherapy, had the following shadow dream:

I was running being chased down by a giant man-like creature that wanted to kill me. I barely made it into safety at the last minute.

In dreams, shadow figures are symbolized as dream characters that are the same sex as the dreamer. In the above dream, the twenty-something man had in real life been running from his shadow. He had not been embracing the developmental tasks that were coming up for him, which in this case, had to do with him committing to a more masculine and fully committed approach to his life and work.

About a year ago, while out hiking in a Rocky Mountain valley in the early winter, I came upon a herd of deer, with two large bucks fighting. When two male deer fight like this they are fighting for dominance and claiming territory. The fights are rarely fatal, but serve as more of a ritualistic “dance” with the function of establishing a “pecking order” thereby bringing more harmony to the deer herd.

It was captivating to watch the deer fight close-up and I was able to capture the display with my camera. The photographs, when arranged in sequential order, illustrate symbolically what can occur when we begin to confront our shadow. Often when we engage the shadow, it actually feels like a real fight.

The below photographs depict how nature can teach us about the shadow through vivid and specific imagery. The raw imagery found in nature can sometimes more fully engage the instinctual part of the psyche. Because of this, nature scenes can both teach us about ourselves and leave a deeper imprint. 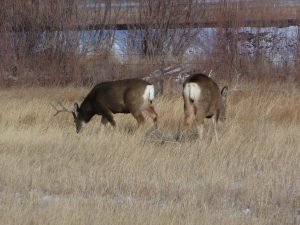 Photograph #1 above with two male deer seemingly going about their own business oblivious to one another is illustrative of a “pre-shadow” work stage when we are unaware that we even have a shadow. 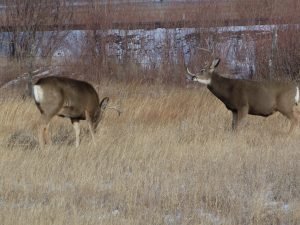 Photograph #2 I have titled “the challenge.” The deer on the right holds his head in a posture that challenges his opponent, as if to say, “here I am.”  In the process of Jungian psychotherapy, it is common to see the shadow act “as if” it is actually challenging us. The buck on the left is busily grazing and appears not real sure if he is ready to take up the challenge. 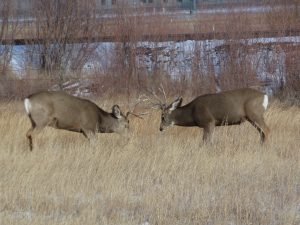 Photograph #3 is “the face off.” Both deer seem to have agreed to fight. This illustrates the beginning of shadow work when we have recognized that the shadow actually exists. 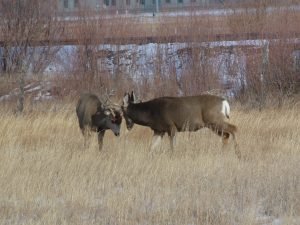 Photograph #4 I have titled “the fight.” The deer have locked antlers and have started to fight.  In Jungian psychotherapy, this would be the time when we decide to engage and struggle with our shadows. This phase has the potential for us to be both a difficult and a rewarding time. 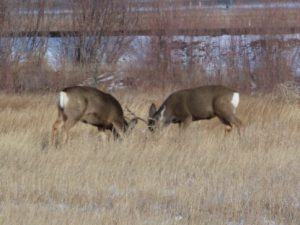 Photograph #5 is post-fight with greater harmony being the reward for fighting and establishing a more secure “pecking order.” When we integrate parts of our shadows, it helps us to integrate important cast-off parts of our personalities that can point toward wholeness and greater creativity. 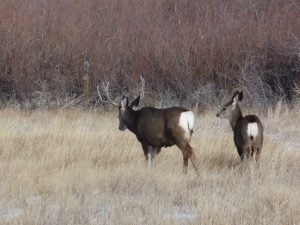 Photograph #6 I have called “synthesis and union.” In the photo, the male buck is walking away with a female after the fight. In Jungian psychotherapy, this illustrates symbolically what can occur after we wrestle with and incorporate more fully parts of our shadows. This can be a rewarding stage in therapy often associated with the more “positive” emotions.

My client’s above dream about being chased by a man-like creature that wanted to kill him is a common shadow-themed dream. The man-like creature/image from the dream really does “want a fight” so to speak. In the dream’s ending, the young man made it to safety “at the last minute.” Facing the shadow in dreams and in life, and not running away, is usually the best strategy for psychological growth.