“I dare you to cross this line,” said my six year old nephew as he challenged the ocean. The development of the ego for children and teenagers, up to around age eighteen, is a central developmental task for a child, and my nephew’s comment above, perfectly illustrates this. The psyche’s goal for the ego during childhood and adolescence is to seek and assume power over the unconscious, as symbolized by the ocean in my example with my nephew. It is common to see this behavior in children and adolescents who will often identify with hero myths and superheroes.

As I mentioned above, I recently witnessed this classic demonstration of this healthy behavior in my six year old nephew who was visiting me in Santa Cruz with his family. We were all enjoying a sunny day at the beach. The adults were reading and visiting under our beach umbrellas, while my nephew was racing back and forth between us to the water’s edge, while the large waves pounded the sand. At one point, he took up a large stick and ran especially fast toward the ocean. Then, as a wave crashed in and washed toward him, he drew a line in the sand with the stick, took an aggressive stance, and yelled to the ocean, “I dare you to 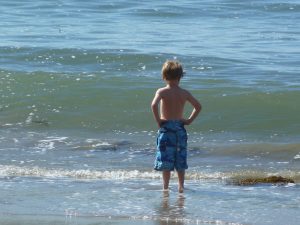 cross this line.” Then, he drew a second line, said it again, and referenced using “the Force” from Star Wars, while acting out holding back the water.

All of us were watching my nephew at the time, and we erupted in laughter. My nephew’s behavior was classically archetypal for someone of his age. Of course, adults can see the absurdity of someone challenging something as mighty and powerful as the ocean. But for a child or teenager, this can be a normal part of the healthy development of the ego. Developing and strengthening the ego is important for children and adolescents as it prepares them for the vicissitudes of later life.

Some time ago I was seeing a family for family psychotherapy, and a dream example from this therapy further illustrates child ego development in an especially unique manner. During the course of the therapy, I briefly saw both the father and his eleven year old son individually. In the period of the same week, they both told me a strikingly similar dream in their individual sessions. Both of them dreamt (without the knowledge of the other’s dream) that they were in Vietnam and fighting the Vietcong.

The interesting thing about understanding dreams, and in particular this dream example from the father and son, is that although they both essentially had the same dream, the interpretation and development tasks for both are entirely different. For the father, the dream was a Jungian shadow dream, and illustrated the need for him to accept his shadow and to let go of the ego and associated egocentricity.

The shadow, according to Jungian theory, is the part of us that is often below our awareness that we fail to see or acknowledge. The shadow can have unsavory aspects of the personality, but it is also a place of great potential and can be a psychic center of creative forces, for example. When an individual first encounters the shadow in a psychotherapeutic process, it can be a frightening time, but also a time of increases in consciousness and personal growth. There is much more to say about the shadow, but not for the purposes of this article.

The dream for the eleven year old boy meant something entirely different. For the child, the dream of fighting the Vietcong was suggesting that he needed to defeat the “enemy.” In other words, he needed to win the battle with the unconscious. Engaging with and winning the battle for a child or adolescent is a process that is associated with the development of the ego, the strengthening of the ego.

Just like my nephew whose psyche was urging him to challenge the ocean, daring the powerful waves to cross the line that he drew in the sand, the dream of my eleven year old client from long ago had a similar motif. His dream was suggesting that he needed to fight and win the battle against the Vietcong (the unconscious). Both my nephew’s behavior and my child client’s dream are processes that occur in children in spite of any conscious awareness. They are developmentally appropriate and psychologically healthy examples of important developmental tasks. They are excellent examples of how the psyche works “below the surface” in a child’s everyday life.

In my psychology practice, I sometimes hear from parents about their concern related to their child or teen’s video gaming or violent television watching behavior. Children and teenagers are often drawn to viewing and playing games related to superheroes and fighting and winning battles against powerful forces. When seen within the context related to the psyche of a child, and its natural tendency to engage in the aforementioned ego development tasks, these behaviors can be put into perspective. Parents will need to decide for themselves the proper balance in their children’s gaming and viewing behavior. It is an obvious fact that for many children, entirely too much time is spent on playing video games indoors and neglecting the outdoors, which is even more important with its “built in” opportunities for play and ego developing tasks.

The development of the ego for the child is of vital concern in the child’s process toward adulthood. There should be ample opportunities allowed in a child’s life to engage in behavior that can help to strengthen the ego during this time.  As parents, we should not be put-off or afraid of our children’s age appropriate behavior that may seem absurd to us—such as with my nephew when he challenged the ocean by saying, “I dare you to cross this line.” The child’s psyche has greater goals in mind, and we should honor this.