Bison bison: A Jungian Psychologist Reflects upon an Enduring American Animal and Symbol

Of all humanity’s clever tools, perhaps the greatest is metaphor. Buffalo can serve as the metaphor for all wildness, and the lesson in their near extinction and return can inform us all about bringing our planet back to balance. 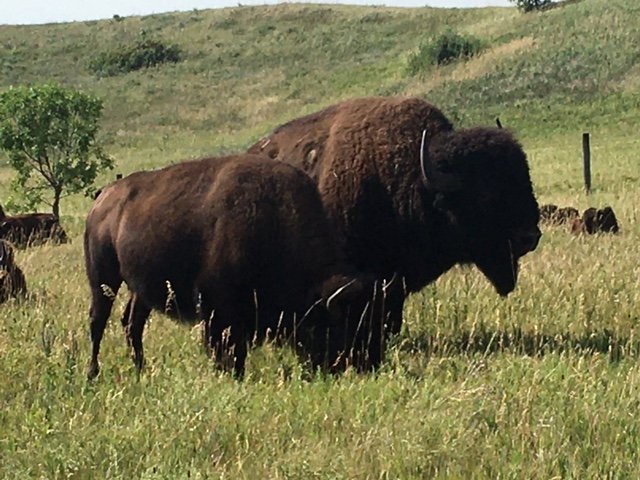 In my dream, I am riding a tandem bike and in the seat behind me was a bison. Since I had this dream, the image of the bison, also commonly called buffalo, has circled around in my psyche, serving as a central guiding image for me in many different areas of my life. Native Americans called bison “Tatanka.”  And in scientific nomenclature the American bison is Bison bison, distinguishing the American bison from its Eurasian ancestors.

Recently, while in San Francisco’s Golden Gate Park, I was watching a small herd of bison that were lying in the sun. I was sitting on a wooden bench under pine trees with a woodpecker high in the tree above me. If it was not for the tall fence between me and the bison and the Pacific Ocean just a few blocks away, I could have been almost anywhere in the American West, sitting on a hillside overlooking a herd of bison grazing on grasses in a mountain valley or on the expansive prairie where immense herds of bison once lived freely.

Surprisingly, the metropolitan city of San Francisco has had a bison herd in The Bison Paddock in Golden Gate Park since 1891. It was in the late 1800’s that American bison were almost wiped out throughout America and if it wasn’t for the great efforts of a few dedicated conservationists, an iconic American animal would now be gone. There is a sign plaque next to the bison paddock in Golden Gate Park with an anonymous quote that states:

Tatanka is more than a word, it is a wakan, sacred way of life. A way of thinking…and living. The spirit that connects us to mother earth. From tatanka came all things necessary for our daily survival, our ceremonies, our traditions.

Bison are a sacred, holy animal for Native Americans.  Steven Rinella (2009) discussed bison as a symbol and said it this way:

At once a symbol of the tenacity of wilderness and the destruction of wilderness; it’s a symbol of Native American culture and the death of Native American culture; it’s a symbol of the strength and vitality of America and the pettiness and greed of America; it represents a frontier both forgotten and remembered; it stands for freedom and captivity, extinction and salvation. Perhaps the buffalo’s enduring strength and legacy comes from this chameleonic wizardry, this ability to provide whatever we need at the given moment.  (p. 256)

Since I was born in South Dakota and schooled in South Dakota and Montana, bison were not unknown to me. I watched them as a boy on the Coteau des Prairie in Northeastern South Dakota, in the Black Hills of South Dakota and in Yellowstone National Park, two places where buffalo roam as close to free as they did 200 years ago. When I travel by car over I-70 crossing the American West, I sometimes stop in Colorado to watch bison at the Bison Overlook. This small bison herd is owned by the City of Denver and is just West of Denver off of I-70 in the foothills of the Rocky Mountains. The Colorado herd are descendants from the Yellowstone bison herd, which are known to be the last wild herd that remained in mountain hideouts after the slaughter of American bison that peaked in the 1870s.

In another of my own bison dreams:

I opened a door at work and there was a herd of bison. All but one bull ran away. The one bull charged out past me and ran down the central hallway and into another hallway. I followed the bull, and I didn’t say anything.

Dan O’Brien is a biologist, author and buffalo rancher in western South Dakota. He is the founder of Wild Idea Buffalo Company https://wildideabuffalo.com/. Prior to buffalo ranching, he raised cattle in South Dakota. In his book, Buffalo for the Broken Heart: Restoring Life to a Black Hills Ranch, he discussed the hardships of raising cattle in the unforgiving land of western South Dakota where cattle are not so well adapted. Buffalo, on the other hand, evolved along with the natural prairie and complement each other. The switch at a pivotal point, from raising cattle to buffalo, seemed to be the idea that worked for him.  Dan O’Brien’s venture is just one example of efforts across the American west to bring the bison population back.

In a dream about buffalo from a female friend:

I was at my parent’s house and in the kitchen looking at the door to the backyard.  I could see these huge bears that also were part buffalo running around a tree in the center of the backyard. Then the bear/buffalo ‘broke free’ and ran through the gate from the back yard. I was surprised and thought they wouldn’t fit through the gate. Then we were looking at them in the front yard and I asked my husband if he could take a picture to show the kids later.

Of course various different animals show up in dreams during different phases of life and are unique to the dreamer even though there can sometimes be universal associations. For me, bison dreams and the symbol of the bison have served as a guide for navigating particularly challenging times in my own life, especially as the image relates to helping with decisions as a clinician and mental healthcare administrator in times demanding adaptation and rapid change such as with the conditions that have occurred during the COVID-19 pandemic.

During prairie snowstorms, bison by nature have a tendency to walk into the snow and move forward through them. It is thought that this decreases time bison endure storms contrasted with movement with storms increasing exposure (Hall, 2021). It is perhaps this behavior of the bison that I reflect upon the most. But the image of bison has more to teach me I imagine as it has not lost its grip on me yet.