Becoming Yourself; Becoming Someone Else 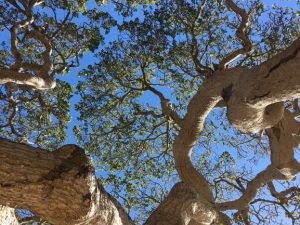 In fact it seems to me as if that alienation which so long separated me from the world has become transferred into my own inner world, and has revealed to me an unexpected unfamiliarity with myself. (Carl Jung, Memories, Dreams, Reflections, p. 359)

What should we make of this final sentence in Carl Jung’s autobiography that he wrote toward the end of his life? Perhaps more than anything else, it illustrates the nature of paradox inherent in Jungian psychology and the process of individuation.

Individuation and an increase in consciousness in some cases can sometimes feel like going against your own nature.  A fish may swim against the flow of the river one day, but with the flow on another.  Becoming familiar with yourself last year and discovering things about you anew, may mean becoming less familiar with yourself this year, as you enter a new phase of life that brings unfamiliar territory and challenges.

An oak tree will become an oak tree if left untouched. However, with careful pruning, its center opens up allowing light to penetrate inside and perhaps even the pruning can help to develop a stronger branch structure and the oak tree takes a different shape. It becomes something else, in a sense.

This idea, I think, is what Jung meant when he said in old age, “…revealed to me an unexpected unfamiliarity with myself.” Herein lies the paradox of the nature of individuation. As insight into self and your own nature increases, it can also at times feel like you are living a parallel path against your nature or you feel like you are going “against the flow.”

But this paradox is at the core of individuation, which can also be described as a deep spiritual path. In other words, it’s holding the tension of the opposites and allowing the tendency of self to change–an enantiodromia. It’s going with nature and against nature at the same time.

As I write these words, I see a man with a gun (a local sheriff) strapped to his waist walking down the meandering trail by the river across from me. A fitting image for illustrating the paradoxical nature of individuation.

“The difference between the ‘natural’ individuation process,” wrote Jung “which runs its course unconsciously, and the one which is consciously realized, is tremendous. In the first case consciousness nowhere intervenes; the end remains as dark as the beginning. In the second case so much darkness comes to light that the personality is permeated with light, and consciousness necessarily gains in scope and insight.” (Carl Jung, Answer to Job)

Truly and deeply becoming yourself will also bring you to unfamiliar places in both your inner and outer world. You may even feel like you are becoming someone else. Do not be afraid, because you will be allowing the light to enter and you will be gaining an inner strength found nowhere else.