An Ethical Viewpoint, Collective Guilt and an Unpublished Letter from Viktor Frankl 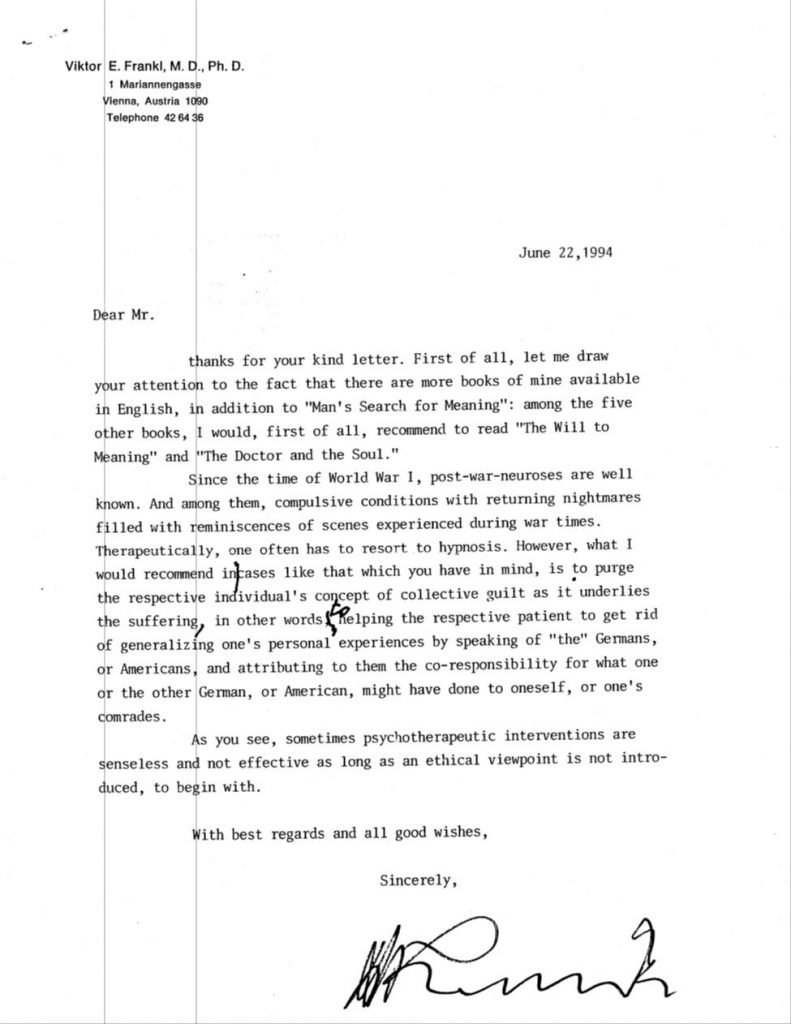 I came to receive a copy of this unpublished letter from Viktor Frankl while doing a psychology internship through a VA system outpatient clinic. At that time I worked primarily with Vietnam veterans suffering from PTSD. A university classmate of mine, who was a Vietnam veteran himself, also worked at the clinic with me. We were both at a point in our graduate studies in which we were learning about and struggling with the different schools of psychotherapy, and attempting to decide which worked best both for our personality type and in our psychotherapeutic work with our clients. In other words, through our university classes, we were tasked with embracing a school or type of psychotherapy to defend in our work with our clientele.

While an intern at the Vet Center, I was being drawn more toward the psychology of Carl Jung. I was fascinated by the dreams and nightmares of the combat veteran clientele at the clinic and with unconscious dynamics in general. My classmate was very much drawn to logotherapy, the existential philosophy and psychotherapy developed by Viktor Frankl. We shared this in common since although I was becoming more” Jungian” in my work with clientele, logotherapy and its inherent “will to meaning” very much resonated with me as well. Actually, logotherapy has much in common with the Jungian school of thought and its inherent focus on meaning. To this day, one of my favorite philosophical books is Frankl’s, Man’s Search for Meaning.

My classmate had one particularly difficult case concerning a Vietnam veteran whom he was working with and who was troubled by frequent nightmares, among other things. My friend wrote a letter to Viktor Frankl for his advice with this case. To both of our surprise, Viktor Frankl wrote back!  I was asked by my friend if I would like a copy of the letter, and I gratefully accepted. I had forgotten about this letter until recently when I discovered it after looking through some old files. I thought I would share it here since perhaps others may be interested. The letter is dated June, 22, 1994, which would be about three years before Viktor Frankl died September 2, 1997, at the age of 92.

This is in part what Viktor Frankl wrote in the letter:

…what I would recommend in cases like that which you have in mind, is to purge the respective individual’s concept of collective guilt as it underlies the suffering, in other words, to helping the respective patient to get rid of generalizing one’s personal experiences by speaking of “the” Germans, or Americans, and attributing to them the co-responsibility for what one or the other German, or American, might have done to oneself, or one’s comrades.

Of course most who are familiar with Viktor Frankl know that he persevered and survived at Auschwitz, a WWII concentration camp during the terror of the Nazis. There are two ideas that I will comment on from Frankl’s letter. First, he not only survived what was perhaps one of humanities most horrific periods of evil, but he learned to not cast blame on the collective. I believe this is the essence of what he was portraying in his letter to my classmate. He appeared to learn from his experiences that blaming groups of “others” does not heal. Furthermore, blaming would not have helped him to survive when the lack of attention to even the smallest details, including having the proper mental attitude to the specific situation, could have easily meant death. Similarly, in the psychotherapist’s office, we sometimes see clients who again and again blame others for their own suffering or symptomology. When this occurs, the suffering and symptoms usually have a much harder time dissipating. Of course there are times when some deserve blame for their actions upon others, but I believe that Viktor Frankl was not writing about these obvious instances.

In Man’s Search for Meaning, Frankl writes further about the concept of “collective guilt.” He said, “I personally think that it is totally unjustified to hold one person responsible for the behavior of another person or a collective of persons.” As a Jewish inmate in a concentration camp, it must have been extremely difficult for him to not become brimming with anger and blame for “the collective enemy.”  Though completely justified in this case, such an intense anger can eat away at the soul, and interfere with vital survival instincts. Instead of sinking into extreme anger and despair, Frankl and a few others survived in part, he said, because of their focus on finding meaning in even the worst of situations. He quotes Nietzsche when he said, “He who has a Why to live for can bear almost any How.” Put another way Frankl added, “The way in which a man accepts his fate and all the suffering it entails, the way in which he takes up his cross, gives ample opportunity-even under the most difficult circumstances-to add a deeper meaning to his life.” He felt this approach to meaning-making and surviving extremely difficult situations was greatly preferred compared to an opposite focus and attitude such as when he said, “…in the bitter fight for self-preservation he may forget his human dignity and become no more than an animal.”

The second idea from Frankl’s letter that I would like to comment on is in the closing sentence when he says, “As you see, sometimes psychotherapeutic interventions are senseless and not effective as long as an ethical viewpoint is not introduced, to begin with.” For those of us who are psychotherapists, this statement is essential to remember. Our therapeutic work with our clients really is senseless, as Frankl suggests here, if we do not begin with the client from a moral and ethical place. Starting from a moral and ethical center is vitally important, and I plan to write more about this notion of a moral center in more detail in a separate post later.

The ideas presented and discussed in this blog post from Viktor Frankl’s unpublished letter and from fitting parts of his book Man’s Search for Meaning, in my opinion, illustrate ideas from one of the great master psychotherapists of our time. Frankl refined his philosophy and practice of logotherapy from the confines of deep within a Nazi concentration camp where he had to endure suffering unlike most of us can even imagine. Those few individuals, like Dr. Frankl, who come out on the other side of such experiences sometimes bring with them the hard earned wisdom of the experience. In Frankl’s case, he was confronted by evil, learned to survive in its midst, and continued to embrace a philosophy that also saw hope for and profound good in the human race. He said at the conclusion of Part II in Man’s Search for Meaning, “After all, man is that being who invented the gas chambers of Auschwitz; however, he is also that being who entered those gas chambers upright, with the Lord’s Prayer or the Shema Yisrael on his lips.”